search
clear
Contact
Large talent pool 20,000+ commuters, skilled locals and UOW graduates
Vibrant coastal city Discover more about why you will love living here
Work-life balance A city where you can achieve real work-life balance
Supportive environment Discover more about local business networks and support
One hour south of Sydney Strategic location, close to Sydney, its airport, and Canberra
UOW – a global university Where you can develop research and commercial partnerships
Costs and staff retention Up to 33% more cost effective than Sydney, Melbourne and Parramatta
Business case studies Hear from the experience of business people who live and work in Wollongong (and love it).
Key opportunities Wollongong provides opportunities across industries and key sectors
Advanced manufacturing Future focus on advanced machinery, equipment design and manufacturing
Defence Capabilities and innovative research in defence technologies and services
Professional services Professional, financial, and shared services firms call Wollongong home
Scaleups and entrepreneurs Wollongong scale-up successes and our entrepreneurial community
Tech Growing hub for forward-thinking tech companies and start-ups
Clean energy Wollongong is emerging as a clean and low-carbon energy hub
Set up a business Find practical information to hit the ground running
Our economic profile Statistics covering our economy and workforce
Our precincts Explore Wollongong's business precincts
Our business networks A list of business groups, networks and meetups
Finding real estate Discover our commercial, industrial and residential options
Economic development The plan for our city between now and 2029
Registering a business Tips and links to set up your business here
Case studies Hear from the experience of business people who live and work in Wollongong (and love it).
How we can help Find out the various ways we can help you and your business
Business case development Assistance with developing your business case for Wollongong
Creating connections We can help you meet the right people in the right places
International team Reach out to our colleagues in your country
Incentives and programs Information about the incentives and programs to support your move
Home / News & Blogs / Doing business in Wollongong / Wollongong, our SMART city 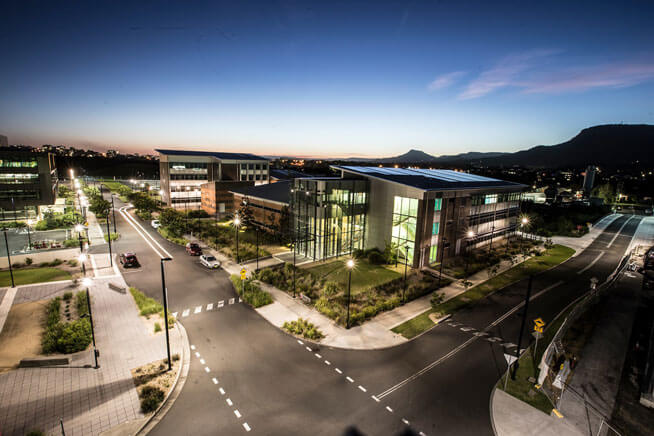 Close cooperation with stakeholders and technology focus at heart of smart-city strategy.

Outstanding collaboration between the Wollongong region’s councils, the University of Wollongong (UOW), peak business groups and industry is driving innovation in the Illawarra–Shoalhaven and strengthening its economy.

Wollongong, 80 kilometres south of Sydney, is a case study in how councils are working with universities and other stakeholders across their region to create industries and jobs, modernise economies and quicken smart-city transformations.

‘Wollongong can become one of the world’s great regional smart cities,’ says Wollongong City Council Economic Development Manager Mark Grimson. ‘We are embracing the digital revolution, supporting research and thinking globally. The result is more companies choosing to co-locate and invest in Wollongong; greater opportunity and jobs; and a stronger community.’

Thirty representatives across government, academia and industry worked on the strategy to understand the region’s unique strengths, opportunities and challenges; build a shared vision; and crowdsource ideas and initiatives to create a leading smart region.

These and other projects highlight the region’s smart-city momentum and the benefits of a coordinated, future-focused planning approach.

‘Wollongong itself is being reinvented from a city traditionally known for steel and coalmaking to a knowledge services hub, globally connected trade hub and leading university city,’ says Grimson.

Higher education underpins Wollongong’s success. The region’s longstanding relationship with UOW reinforces the benefits of councils and universities working together on regional issues. Local councils have funded several UOW projects and have drawn on the university’s expertise in smart-city planning.

Established in 2011, the $62 million Facility’s focus on regional innovation and council collaboration is unique. ‘We’re capturing data across the region and working with councils to solve complex problems,’ says UOW Senior Professor Pascal Perez, part of the

Facility’s leadership team. ‘Through an evidence-based approach and latest technologies, we can innovate infrastructure and help the community and environment.’

Perez says UOW has an important role in regional innovation. ‘Great global innovation clusters often form just outside of large capital cities and have a high-performing university at the centre of the ecosystem,’ he says. ‘In Australia, larger innovation clusters are forming in Wollongong, Newcastle, Geelong and parts of South East Queensland. Regional universities are playing a key role.’

The SMART Infrastructure Facility’s work on Vision Illawarra is an example. UOW combines publicly available data on the region’s economy, demographics, transport and utility usage through a regularly updated online dashboard. The data is used to project the region’s needs and guide council decision-making.

UOW’s Digital Living Lab helps prototype smart-city innovations. Projects include a 3D Smart Sensing Model that uses sensors and IoT technology to provide 3D modelling of temperature, motion and other variables in real time. The model is part of a collaboration between SMART, Nube IO and Devika.

Emerging tech company Briometrix is working with the Facility to develop smart wheelchairs that use sensors to capture data and map optimal routes for users. The app visualises the terrain from the user’s perspective, tracks journeys and displays interactive maps.

The Facility’s work on an IoT network for the region has great promise. Created by UOW, the free-to-air network covers 90 per cent of the region. The plan is to install sensors on more council facilities, such as wastewater drains, to better understand the region’s needs in real time and optimise council infrastructure for the community.

Other projects being developed through the Facility include apps and drones to prevent shark attacks, 3D-printed surfboard fins, a campus safety app, smart hydrants, and Binary Beer’s smart kegs that monitor beer quality and locations.

‘These are potentially game-changing projects,’ says Perez. ‘In time, they could lead to new industries, companies and jobs in Wollongong, and add to the region’s technology capability.’

UOW’s success in teaching and research is another Wollongong asset. UOW, rated in the top two per cent of world universities, has 34,000 students and offers 340 degrees.

UOW’s Innovation Campus, an award-winning, internationally recognised business park that includes some of Australia’s largest commercial and not-for-profit organisations, forms part of a triangle extending to UOW and the southern part of Wollongong’s city centre.

As the region’s capital, Wollongong is an important source of job creation. The CBD  has undergone a significant transformation, with $1.3 billion in investment since 2012 and another $600 million in the pipeline.

Wollongong has several industry attractions. The city is a 90-minute drive to Sydney’s CBD, and its proximity to Sydney International Airport and the planned Western Sydney Airport is another strength.

‘The Illawarra–Shoalhaven is a big market in its own right, and Sydney is just over an hour away,’ says Grimson. The region is New South Wales’s third largest economy, contributing $22.8 billion to the state annually (according to REMPLAN).

Urban densification, congestion and high property prices are expected to continue to encourage more Sydneysiders to relocate to the region. Wollongong houses and units are 35 to 40 per cent cheaper than the greater Sydney average. Thousands of new homes are being built.

‘Wollongong residents benefit from a family-friendly coastal lifestyle and better housing affordability compared to Sydney. They have good local job opportunities or can commute to Sydney,’ says Grimson. About 20,000 residents from across the region commute to Sydney for work.

Wollongong has a fast-growing footprint in the knowledge services sector, including ICT, superannuation and shared services. More companies and government organisations in this sector are co-locating in Wollongong to reduce operating costs and access an expanding, skilled workforce while servicing national and global markets. ICT giant NEC opened its corporate office in Wollongong in 2016 and now employs more than 150 people. International wealth-management firm Mercer employs 600 people. ‘These and other firms are benefiting from our local skilled workforce,’ says Grimson.

Wollongong is also making gains in advanced manufacturing and tourism, and investment in its industrial base is rising. A $75 million investment in Port Kembla, five kilometres south of the Wollongong CBD, has boosted the port’s export capacity. Port Kembla is New South Wales’s largest motor vehicle import hub and grain export terminal, and its second-largest coal export port.

‘Wollongong has come a long way from a city hit hard by the steel downturn in the ’90s, and has a long way to go,’ says Grimson. ‘There’s never been a better time to invest in Wollongong and one of the world’s great emerging smart regions.’

Source: A city transformed: Wollongong positions itself for a digital revolution article featured in Forges Magazine  Vol 4 | No 2 | 2018.