search
clear
Contact
Why Wollongong Why Wollongong is the best place to base your business
Large talent pool 20,000+ commuters, skilled locals and UOW graduates
Vibrant coastal city Discover more about why you will love living here
Work-life balance A city where you can achieve real work-life balance
Supportive environment Discover more about local business networks and support
One hour south of Sydney Strategic location, close to Sydney, its airport, and Canberra
UOW – a global university Where you can develop research and commercial partnerships
Our precincts Explore Wollongong's business precincts
Costs and staff retention Up to 33% more cost effective than Sydney, Melbourne and Parramatta
Why we chose Wollongong Business executives and founders share their personal experience
Key opportunities Wollongong provides opportunities across industries and key sectors
Advanced manufacturing Future focus on advanced machinery, equipment design and manufacturing
Defence Capabilities and innovative research in defence technologies and services
Professional services Professional, financial, and shared services firms call Wollongong home
Scaleups and entrepreneurs Wollongong scale-up successes and our entrepreneurial community
Tech Growing hub for forward-thinking tech companies and start-ups
Living in Wollongong Discover what life will be like when you move here
Our environment Explore our beaches, pools, parks, hiking trails and zoo!
Arts and culture Theatre, galleries, museums - we have it covered
Shopping Learn more about our major shopping precincts
Music, sport and fun Discover where to go for people of all ages and tastes
Restaurants and markets Hundreds of cafes, small bars and restaurants and our many markets
Things to see and do Fill your weekends with activities at our favourite places
Community integration How you can get involved and meet the locals
Health and wellbeing More information about our city's health facilities
Education and training From pre-school to postgraduate - life-long learning opportunities
Getting to and around Car, train, bus, air and bike - our city is covered
Set up a business Find practical information to hit the ground running
Our economic profile Statistics covering our economy and workforce
Registering a business Tips and links to set up your business here
Finding real estate Discover our commercial, industrial and residential options
Our business networks A list of business groups, networks and meetups
Economic development The plan for our city between now and 2029
Resources Our economic and research publications
How we can help Find out the various ways we can help you and your business
Business case development Assistance with developing your business case for Wollongong
Creating connections We can help you meet the right people in the right places
International team Reach out to our colleagues in your country
Incentives and programs Information about the incentives and programs to support your move
Stakeholder Program Join our Stakeholder Program and collaborate with us

We’re ready to answer your questions and provide the information you need.

For most businesses, location is key to success

Whether you’re an established brand or a scale up, Wollongong is a strategic location for your business. Here are some of the reasons why:

“We were looking to find somewhere that had strong links to infrastructure, for example, access to Sydney and Canberra, and to international air terminals.” 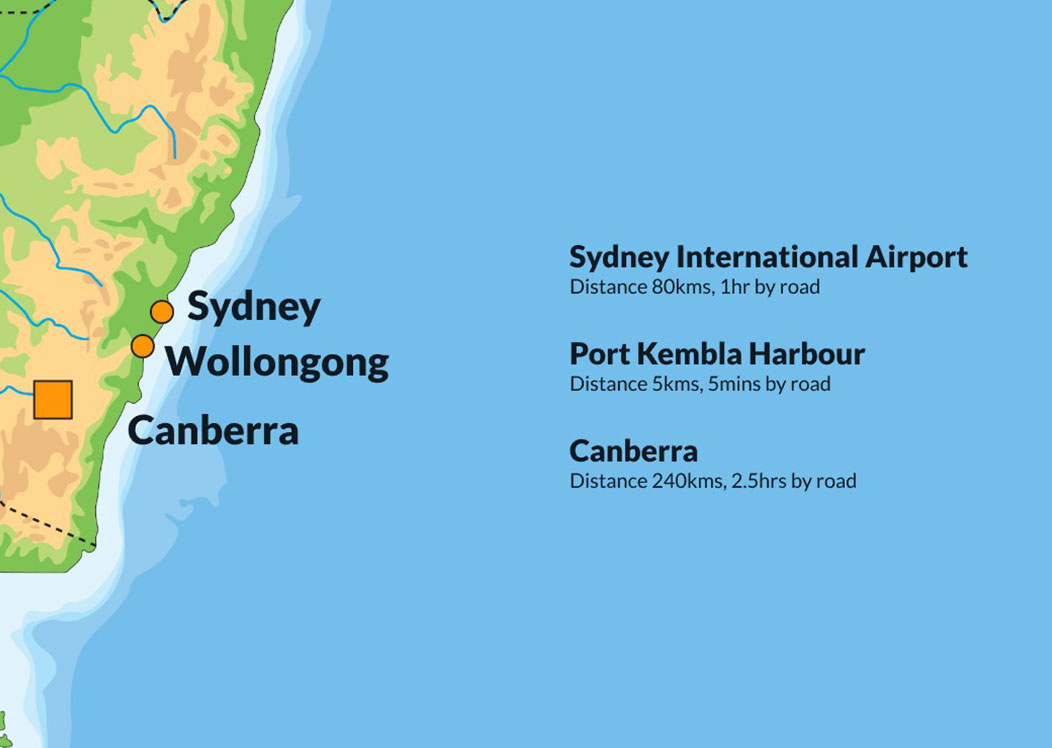 Close to Sydney: Easy to travel and visit clients

Wollongong is only an hour south from Australia’s largest city, Sydney. Yet we live and work without the congestion and stress of a major city. This is a big plus for many of the entrepreneurs, business owners and companies who chose to base their business here. Yet, that isn’t the only advantage.

We are also only an hour away from Australia’s most connected airport, the Sydney Airport which has a domestic and international terminal. The reality is that it will often take those who live and work in Wollongong the same amount of time or even less to travel to the airport than many of those who live in Sydney.

Wollongong is also only one hour away from the new Western Sydney Airport, Sydney’s second airport currently under construction. If you base your business in Wollongong you will be spoilt for choice as to which airport you choose to take a well-deserved holiday or head off on a business trip.

Visiting clients in Sydney is also easy given Wollongong is connected to the CBD and other key business centres across Sydney such as Parramatta, Macquarie Park, Liverpool and North Sydney through the M1 Princess Motorway and other major roadways.

One hour from Australia’s cultural capital

On the weekends you can easily head to Sydney and attend events like the spectacular Vivid Light Festival or explore Sydney’s many museums such as the Australian Museum or the Museum of Sydney.

Or perhaps you want to see what collections the Art Gallery of NSW is currently displaying or watch your favourite team play at Allianz Stadium. All these options are within your reach when you live in Wollongong.

Australia’s capital city, Canberra, is a 2.5 hour drive away from Wollongong. The home of the federal government and its departments, as well as national cultural institutions such as the National Museum of Australia, National Art Gallery and Australian War Memorial, Canberra is in close reach by road.

As well, Australia’s second largest city and CBD, Melbourne can be reached from Wollongong via direct services from our regional airport.

Businesses such as those in professional services or the tech industry can easily meet clients, send their staff to conference or attend business networking events given Wollongong’s proximity to these major cities.

“We have accessibility to Canberra, Sydney and regional New South Wales.”

Port Kembla provides businesses based in Wollongong with access to worldwide markets and is situated just five kilometres south of the Wollongong CBD.

Our port is NSW’s largest motor vehicle port and grain export hub. It operates across two precincts, the inner harbour and the outer harbour.

Port Kembla is the first NSW approved liquified natural gas (LNG) import terminal being developed by AIE. This terminal will provide a more reliable gas supply to households and businesses, supplying up to 7o per cent of NSW’s gas needs and helping drive down prices for consumers state-wide.

Access to this reliable energy resource has been welcomed by the many Advanced Manufacturing businesses that call Wollongong and NSW home.

Click below to view a copy of the NSW Ports map of Port Kembla.

“We are located close to a deep water port and to Southeast Asia, which is a huge and growing market.”

Wollongong benefits greatly from being part of the Sydney train network, making travel for business and travel easy. We have our own train line, the South Coast Line, that connects Wollongong to the entire Sydney network including the CBD and other major business hubs.

Many of our travelling business people will take the train right to the Sydney International Airport and get to enjoy the journey that hugs the beautiful Wollongong coastline along the way.

Wollongong is also connected to the national freight network which is regularly used by Australian grain exporters.

“We’re strategically placed in one of the largest regional cities in the country, and it’s only an hour away from Sydney. We rely on transport and logistics to cover the whole country.”

Wollongong has its own regional airport

Access to the major capitals on the east coast is easy through the Shellharbour Airport with daily flights to Melbourne and Brisbane.

The amenities at the Shellharbour Airport are set to improve further with the NSW Government committing $16 million to its upgrade that will include a new terminal building and Aviation Business Park making travel even more enjoyable.

You will love the minimal queues and ease of parking that our local regional airport will provide you and your business.

Did you know that most locations in Wollongong offer double or even triple fibre optic redundancy? This gives peace of mind to data reliant companies and puts Wollongong in a great place to host your digital business.

The new $125 million data centre in Wollongong provides local businesses with data activity within two milliseconds of Sydney and Canberra and the region is experiencing a strong record of growth in the information technology sector.

Wollongong is also covered by a free to air Internet of Things (IoT) network platform using LoRaWAN with other technologies helping our region join the digital revolution. The University of Wollongong along with the SMART Infrastructure Facility have created the Digital Living Lab and are working on various projects of benefit to Wollongong and Australia, such as building energy monitoring, air quality monitors, smart hydrants and various apps used by the community.

“We have fast internet here, the NBN connections are great.”

Ideal location for 24hr servicing to your customers

Today many businesses need to provide 24/7 support to their clients and customers and are looking for affordable locations to set up an additional branch or satellite office. Geographically located opposite to the time zones of the United States of America and the United Kingdom (UK), having an office in Wollongong gives you the option of providing round the clock services in an affordable location with access to a skilled workforce.

Set up a business