search
clear
Contact
Large talent pool 20,000+ commuters, skilled locals and UOW graduates
Vibrant coastal city Discover more about why you will love living here
Work-life balance A city where you can achieve real work-life balance
Supportive environment Discover more about local business networks and support
One hour south of Sydney Strategic location, close to Sydney, its airport, and Canberra
UOW – a global university Where you can develop research and commercial partnerships
Costs and staff retention Up to 33% more cost effective than Sydney, Melbourne and Parramatta
Business case studies Hear from the experience of business people who live and work in Wollongong (and love it).
Key opportunities Wollongong provides opportunities across industries and key sectors
Advanced manufacturing Future focus on advanced machinery, equipment design and manufacturing
Defence Capabilities and innovative research in defence technologies and services
Professional services Professional, financial, and shared services firms call Wollongong home
Scaleups and entrepreneurs Wollongong scale-up successes and our entrepreneurial community
Tech Growing hub for forward-thinking tech companies and start-ups
Clean energy Wollongong is emerging as a clean and low-carbon energy hub
Set up a business Find practical information to hit the ground running
Our economic profile Statistics covering our economy and workforce
Our precincts Explore Wollongong's business precincts
Our business networks A list of business groups, networks and meetups
Finding real estate Discover our commercial, industrial and residential options
Economic development The plan for our city between now and 2029
Registering a business Tips and links to set up your business here
Case studies Hear from the experience of business people who live and work in Wollongong (and love it).
How we can help Find out the various ways we can help you and your business
Business case development Assistance with developing your business case for Wollongong
Creating connections We can help you meet the right people in the right places
International team Reach out to our colleagues in your country
Incentives and programs Information about the incentives and programs to support your move
Living in Wollongong Discover what life will be like when you move here
Our environment Explore our beaches, pools, parks, hiking trails and zoo!
Arts and culture Theatre, galleries, museums - we have it covered
Shopping Learn more about our major shopping precincts
Music, sport and fun Discover where to go for people of all ages and tastes
Restaurants and markets Hundreds of cafes, small bars and restaurants and our many markets
Things to see and do Fill your weekends with activities at our favourite places
Community integration How you can get involved and meet the locals
Health and wellbeing More information about our city's health facilities
Education and training From pre-school to postgraduate - life-long learning opportunities
Getting to and around Car, train, bus, air and bike - our city is covered
Home / News & Blogs / Doing business in Wollongong / Local startup Devika reaches global clients

After rising in the ranks of his family business, Ken Kencevski, a local Wollongong resident, left it all behind to follow in the footsteps of his entrepreneurial idols and launched Devika. 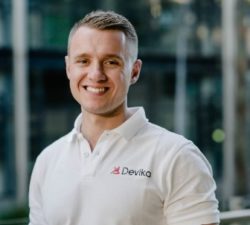 With blue chip clients, including Westpac, Dell, Microsoft and Intel, Devika now services more than 100 clients both in Australia and overseas.

Ken Kencevski, Devika’s founder, comments on how he leveraged Wollongong’s solid foundation of community to establish his business:

“As an IT graduate from the University of Wollongong, I’ve experienced the community first-hand and seen other software developers emerge from the vibrant seaside city over the years. This was one of the main reasons why I knew it had all the factors needed for my business to thrive.

“The community support is such a strong advantage for startups, and I strongly believe that you reap what you sow. We foster new talent, which we know will benefit us in the long-run, by collaborating with UOW to host internships, hackathons and Global Game Jams.”

“Starting a business in Wollongong has huge operational advantages. Operational costs for one are much lower than major cities. Not having as many local sales opportunities on our doorstep means we’re forced to think global.

“For Devika, from day one we’ve been pushed towards international clients who have grown us exponentially. We’re a prime example demonstrating it’s entirely possible to build a successful company outside of capital cities, and to love where we live at the same time.”