search
clear
Contact
Large talent pool 20,000+ commuters, skilled locals and UOW graduates
Vibrant coastal city Discover more about why you will love living here
Work-life balance A city where you can achieve real work-life balance
Supportive environment Discover more about local business networks and support
One hour south of Sydney Strategic location, close to Sydney, its airport, and Canberra
UOW – a global university Where you can develop research and commercial partnerships
Costs and staff retention Up to 33% more cost effective than Sydney, Melbourne and Parramatta
Business case studies Hear from the experience of business people who live and work in Wollongong (and love it).
Key opportunities Wollongong provides opportunities across industries and key sectors
Advanced manufacturing Future focus on advanced machinery, equipment design and manufacturing
Defence Capabilities and innovative research in defence technologies and services
Professional services Professional, financial, and shared services firms call Wollongong home
Scaleups and entrepreneurs Wollongong scale-up successes and our entrepreneurial community
Tech Growing hub for forward-thinking tech companies and start-ups
Clean energy Wollongong is emerging as a clean and low-carbon energy hub
Set up a business Find practical information to hit the ground running
Our economic profile Statistics covering our economy and workforce
Our precincts Explore Wollongong's business precincts
Our business networks A list of business groups, networks and meetups
Finding real estate Discover our commercial, industrial and residential options
Economic development The plan for our city between now and 2029
Registering a business Tips and links to set up your business here
Case studies Hear from the experience of business people who live and work in Wollongong (and love it).
How we can help Find out the various ways we can help you and your business
Business case development Assistance with developing your business case for Wollongong
Creating connections We can help you meet the right people in the right places
International team Reach out to our colleagues in your country
Incentives and programs Information about the incentives and programs to support your move
Home / News & Blogs / Doing business in Wollongong / Wollongong on the rise

Our city, a magnet for talent and new businesses 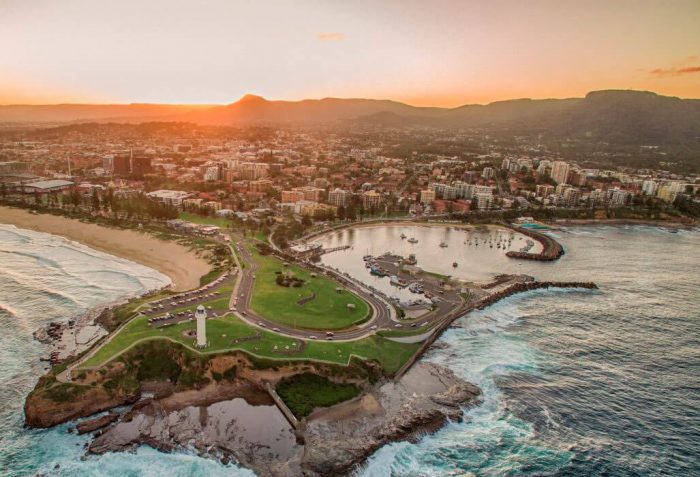 Wollongong has transformed over the past three decades from a heavy industrial and mining city to one that is focused on knowledge-intensive industries attracting global and local businesses.

Employment opportunities in the Wollongong area of 300,000 people, 70km south of Sydney, have been growing rapidly in health and social services and education, as well as emerging sector such as Knowledge Services and Advanced Manufacturing.

“They can attract good quality, highly skilled staff and retain them because of the lifestyle benefits in Wollongong”.

Another example is UK educational publisher Twinkl, which decided to set up in Wollongong after a nationwide search for Australian premises.

Growth and employment are also coming from homegrown local sources. For instance, Accelo was founded in Wollongong and provides cloud-based solutions to manage time-based professional services firms. It has expanded to Silicon Valley and will soon open an office in Denver. However, the company continues to grow its engineering, research and development arm in Wollongong, tapping into high-quality University of Wollongong IT graduates to help accelerate its growth.

Further magnifying the region’s attractiveness is the University of Wollongong’s Innovation Campus – a business park with a focus on collaboration between academia and industry. The 33ha site by the Pacific Ocean in North Wollongong houses tenants such as AMP, the Commonwealth Bank, Twinkl and NEC. Wollongong’s developing, innovative eco-system has been further expanded by iAccelerate, the region’s business incubator program, which provides a permanent home for 280 entrepreneurs across 4000 square metres.

The city’s changing lifestyle is also a major attraction.

Like many other cities, Wollongong has had a large amount of inner city development but with a key difference – the city is located on the coast. Mixed-use developments, an increasingly cosmopolitan lifestyle and the small bar and cafe culture have transformed the CBD over the past five years.

The Wollongong CBD has also attracted record investment , with $1.3 billion invested over the past four years, and another $300 million in the pipeline. “There are opportunities in Wollongong – whether starting or growing your business – where you can get a skilled, stable workforce,” says Farmer. An analysis by Deloitte revealed staff attrition rates in the shared services sector in Wollongong were just five per cent compared with 25 per cent in Sydney.

Employers also have access to Wollongong’s commuter workforce, which provides a ready-made pool of highly skilled employees for businesses to tap into. Another source of talent is the University of Wollongong, which attracts more than 20,000 students from around the country and the globe.

Investors are also becoming increasingly attracted to the sorts of property yields that aren’t possible in larger commercial office markets. The A-grade Corporate Square office building in the Wollongong CBD sold for a record $46.1 million last year, at a yield of 7.38 per cent.

With so many strengths, this is a city to keep on the radar.