search
clear
Contact
Large talent pool 20,000+ commuters, skilled locals and UOW graduates
Vibrant coastal city Discover more about why you will love living here
Work-life balance A city where you can achieve real work-life balance
Supportive environment Discover more about local business networks and support
One hour south of Sydney Strategic location, close to Sydney, its airport, and Canberra
UOW – a global university Where you can develop research and commercial partnerships
Costs and staff retention Up to 33% more cost effective than Sydney, Melbourne and Parramatta
Business case studies Hear from the experience of business people who live and work in Wollongong (and love it).
Key opportunities Wollongong provides opportunities across industries and key sectors
Advanced manufacturing Future focus on advanced machinery, equipment design and manufacturing
Defence Capabilities and innovative research in defence technologies and services
Professional services Professional, financial, and shared services firms call Wollongong home
Scaleups and entrepreneurs Wollongong scale-up successes and our entrepreneurial community
Tech Growing hub for forward-thinking tech companies and start-ups
Clean energy Wollongong is emerging as a clean and low-carbon energy hub
Set up a business Find practical information to hit the ground running
Our economic profile Statistics covering our economy and workforce
Our precincts Explore Wollongong's business precincts
Our business networks A list of business groups, networks and meetups
Finding real estate Discover our commercial, industrial and residential options
Economic development The plan for our city between now and 2029
Registering a business Tips and links to set up your business here
Case studies Hear from the experience of business people who live and work in Wollongong (and love it).
How we can help Find out the various ways we can help you and your business
Business case development Assistance with developing your business case for Wollongong
Creating connections We can help you meet the right people in the right places
International team Reach out to our colleagues in your country
Incentives and programs Information about the incentives and programs to support your move
Living in Wollongong Discover what life will be like when you move here
Our environment Explore our beaches, pools, parks, hiking trails and zoo!
Arts and culture Theatre, galleries, museums - we have it covered
Shopping Learn more about our major shopping precincts
Music, sport and fun Discover where to go for people of all ages and tastes
Restaurants and markets Hundreds of cafes, small bars and restaurants and our many markets
Things to see and do Fill your weekends with activities at our favourite places
Community integration How you can get involved and meet the locals
Health and wellbeing More information about our city's health facilities
Education and training From pre-school to postgraduate - life-long learning opportunities
Getting to and around Car, train, bus, air and bike - our city is covered
Home / News & Blogs / Doing business in Wollongong / Local start-up Accelo plans to double its workforce

Wollongong founded and Silicon Valley headquartered Accelo has signed a lease that will allow it to more than double its space in the Illawarra.

Accelo is moving the the MMJ building in 8 Regent Street, Wollongong in early 2019.

The move comes off the back of a record year of growth that has seen Accelo increase its Wollongong-based team by 21 in 2018.

The 75 per cent increase in the size of the workforce since the start of the year comes as the business plans to double the number of employees in the Illawarra.

Co-founder and chief executive Geoff McQueen said the new space is needed to accommodate such rapid growth as its team of designers, software developers and product quality specialists.

“While our headquarters are in Silicon Valley, our Wollongong office is still the largest in the company, and without doubt the engine room for our technology”, Mr McQueen said.

“While 2018 has seen the fastest growth in our history, we’re not planning on slowing down, and this new space will help ensure we can hire more amazing people in the years ahead”. 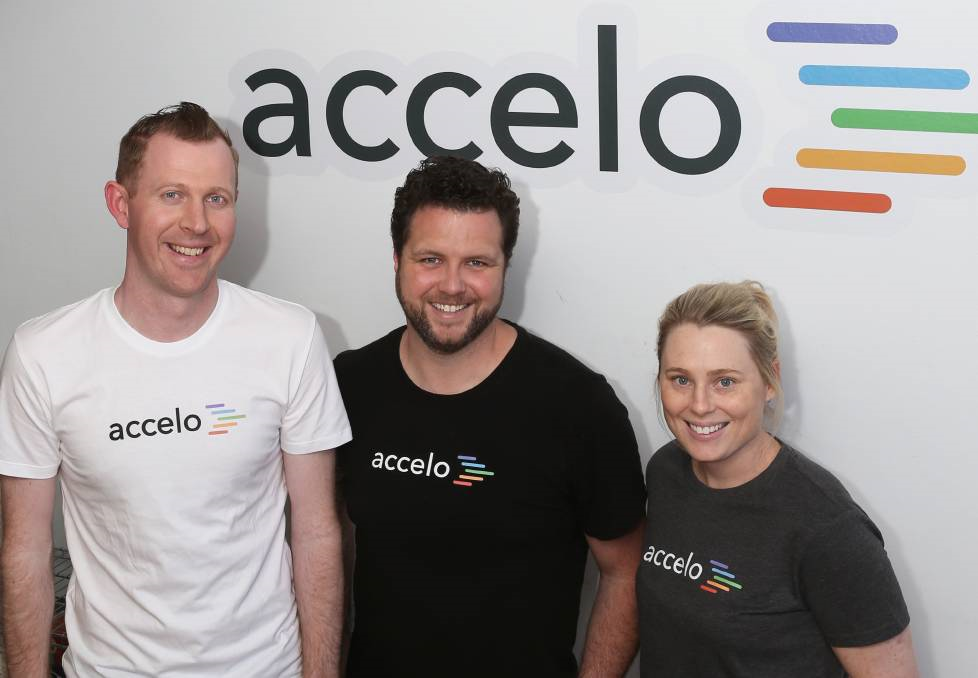 Accelo is moving into two floors at 8 Regent St which has undergone significant renovation.

Accelo are a tremendous local business success story, and exemplify exactly how this region is evolving, he said.

They are exactly the type of business this region needs to embrace.”

Launched as AffinityLive in 2011, Accelo has raised over $15 million in venture capital from investors in New York, San Francisco and Sydney.
It has more than 100 staff globally. Other US offices are located in San Francisco and Denver.

Co-founder Eamonn Bell said it was really special to be working on a Silicon-Valley quality product from Wollongong.

It might sometimes feel like Wollongong is a long way from the global technology industry, but every day here we’re working on a platform used by tens of thousand of people that creates more than a billion dollars of value a year for our clients,” he said.

In addition to working closely with the University of Wollongong – almost 90 per cent of the local team are UoW graduates. The last 12 months have demonstrated the attraction of the Illawarra as a global destination. With Accelo hiring experienced developers from larger markets like Sydney. As well as people from backgrounds as diverse as China, Germany, India, Norway, Scotland, South Africa, Thailand, Ukraine and Vietnam.

People and Operations manager Carrie Ball said when it came to selecting a new office the businesss rapid growth meant it needed to have both a quality location and a good relationship with the landlord.

The Regent Street building has had a lot of upgrades.

And with its close links to transport and other developments in the area, we’re excited to have a new base where we can work closely with the building owners and managers, MMJ, who are just a few floors away”.

Mr McQueen has lived in the US for more than seven years and is l always amazed every time he comes back to Wollongong.

It is wonderful to see the talent that Wollongong creates, attracts and retains,” he said.

Our team is unquestionably world class, and our base in Wollongong has become our X-factor. We are excited to keep growing in the Illawarra and can’t wait to double the business again over the near couple of years.”

Accelo, the pioneer of Service Operations Automation (ServOps), streamlines operations from prospect through to payment through their integrated, cloud-based platform.
Thousands of businesses use Accelo to run their critical client service delivery, boosting revenue and productivity and doubling profit margins.
Accelo is headquartered in San Francisco with an office in Wollongong, Australia.

Martin Morris & Jones (MMJ) is a boutique real estate firm delivering a wide range of market leading professional services to a diverse and growing client base for over 55 years.