search
clear
Contact
Large talent pool 20,000+ commuters, skilled locals and UOW graduates
Vibrant coastal city Discover more about why you will love living here
Work-life balance A city where you can achieve real work-life balance
Supportive environment Discover more about local business networks and support
One hour south of Sydney Strategic location, close to Sydney, its airport, and Canberra
UOW – a global university Where you can develop research and commercial partnerships
Costs and staff retention Up to 33% more cost effective than Sydney, Melbourne and Parramatta
Business case studies Hear from the experience of business people who live and work in Wollongong (and love it).
Key opportunities Wollongong provides opportunities across industries and key sectors
Advanced manufacturing Future focus on advanced machinery, equipment design and manufacturing
Defence Capabilities and innovative research in defence technologies and services
Professional services Professional, financial, and shared services firms call Wollongong home
Scaleups and entrepreneurs Wollongong scale-up successes and our entrepreneurial community
Tech Growing hub for forward-thinking tech companies and start-ups
Clean energy Wollongong is emerging as a clean and low-carbon energy hub
Set up a business Find practical information to hit the ground running
Our economic profile Statistics covering our economy and workforce
Our precincts Explore Wollongong's business precincts
Our business networks A list of business groups, networks and meetups
Finding real estate Discover our commercial, industrial and residential options
Economic development The plan for our city between now and 2029
Registering a business Tips and links to set up your business here
Case studies Hear from the experience of business people who live and work in Wollongong (and love it).
How we can help Find out the various ways we can help you and your business
Business case development Assistance with developing your business case for Wollongong
Creating connections We can help you meet the right people in the right places
International team Reach out to our colleagues in your country
Incentives and programs Information about the incentives and programs to support your move
Living in Wollongong Discover what life will be like when you move here
Our environment Explore our beaches, pools, parks, hiking trails and zoo!
Arts and culture Theatre, galleries, museums - we have it covered
Shopping Learn more about our major shopping precincts
Music, sport and fun Discover where to go for people of all ages and tastes
Restaurants and markets Hundreds of cafes, small bars and restaurants and our many markets
Things to see and do Fill your weekends with activities at our favourite places
Community integration How you can get involved and meet the locals
Health and wellbeing More information about our city's health facilities
Education and training From pre-school to postgraduate - life-long learning opportunities
Getting to and around Car, train, bus, air and bike - our city is covered
Home / News & Blogs / Blogs / How entrepreneurs are minimising food wastage in Wollongong 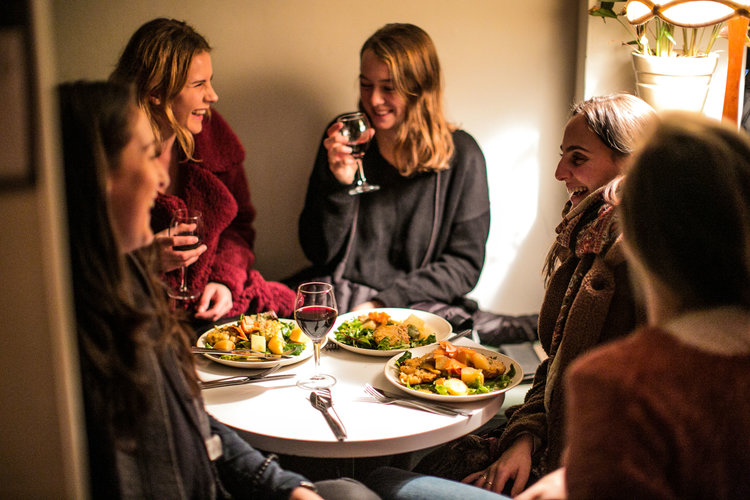 Food wastage is an issue that’s been at the forefront recently, and for good reason. In Australia alone, the average household throws away $77 worth of edible food every week! Twenty per cent of food never makes it to the plate, which equates to $1036 per home.

One in every five grocery bags goes straight in the bin, businesses waste up to 30 per cent of their produce, and the government estimates that four million tonnes of food ends up as landfill every year – enough to fill 8400 Olympic-sized swimming pools.

Those are scary stats! Why? Because not only does food wastage obviously go hand-in-hand with cost (no-one likes throwing away a grand a year, right?!), but food scraps in landfill emit methane gas, a leading contributor to global warming – so our habits have an enormous environmental effect too.

Fortunately, with education comes a shift in motion, and as a national community steps seem to be being made in the right direction. In our little pocket of the world, a homegrown group are forging the way forward by giving the Illawarra the “the tools and forks to tackle food waste and shape a sustainable food future”.

They are Hidden Harvest – a not-for-profit organisation made up of passionate and dedicated volunteers, who are extending their #MoreTasteLessWaste attitude to the wider community in exciting and fun ways.

“awareness is growing, attitudes are progressing, ideas are being shared – and that’s the core of these committed volunteers”

Hidden Harvest is the brainchild of Berbel Franse. While working in Ghana, West Africa, on agriculture projects, she noticed there was much potential for food being wasted due to lack of refrigeration or packaging, but despite this, the people there still used every piece of food they received. From cooking chicken bones for nutrients, to cutting-up rotten tomatoes for flavour in stews… absolutely nothing was wasted.

When Berbel came back to Australia, she wondered why a similar mentality was not being applied – especially considering the means and resources we have here to farm, transport and keep our food fresh.

With a Masters degree in sustainability, Berbel saw the opportunity to implement her expertise and educate those around her, while also encouraging significant and important change at a grassroots level.

So, in 2016 Hidden Harvest was born.“It started as a small thing in Berbel’s living room with good friend Lucy Farrier,” says Susie Alderman, Media and Communications Coordinator for Hidden Harvest. “A few people were having dinners together and sharing this idea – from there, a group started to get excited about the initiative, and two years later it’s now this amazing organisation that’s growing all the time.”

Made up of a core team of 10, who each have designated roles, and around 30 volunteers, named the ‘Rock Up and Kill It Crew’, who help out at events, Hidden Harvest is making its message known by generating lively discussion and celebrating the ignored, overlooked or surplus products of our food system.

“Everything we do, we try to do it in a fun and memorable way,” Susie says. “For example, last year we built a bread fortress at the Yours & Owls festival. We collected bread over a week that had been disposed of, and built a big fortress out of it to show people in a really visual way, that this is what’s going in the bin.”

Unsurprisingly, festivalgoers were shocked by the amount of completely edible bread that had been deemed garbage. The team used the bread to serve free toast to everyone over the weekend as a statement about what we so easily chuck out.

This year the Hidden Harvest team will be back at Yours & Owls over the October long weekend putting a slightly more-spooky spin on their bubbly brand of food wastage fun, with a haunted house and food waste confessional in the works.

Over winter, the team also implemented the campaign When Life Gives You Lemons, which saw crates placed all over the Illawarra being filled with excess citrus from locals’ trees who had an abundance of fruit. This fruit was then free for others to pick up.

No fuss, no waste. “We tried to get the community involved in sharing the food that otherwise would have gone to waste,” Susie says. “It was a simple way for people to enjoy the fruit for free and to save the citrus.” 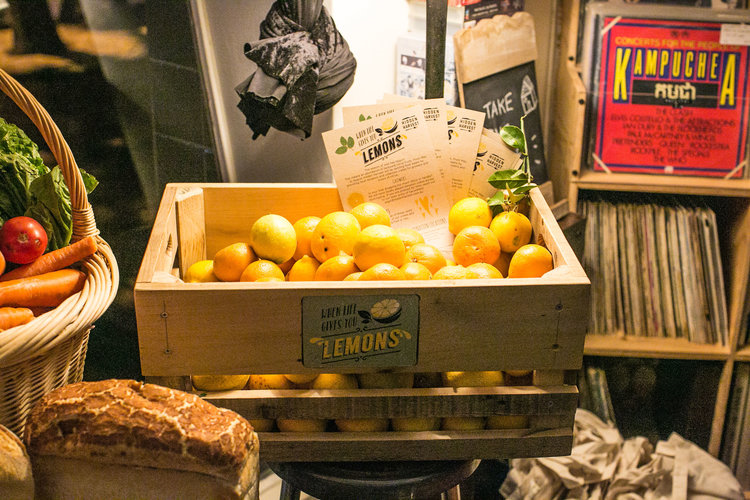 On top of this, Hidden Harvest sell chutneys across the Illawarra, which a team, known as Pickle Pals, whip up in the Moore Street General kitchen every two weeks using surplus produce donated from local fruit shops.

And while such campaigns are making leaps, the food wastage problem often begins further down the supply chain – an estimated 20-40 per cent of fruit and vegies are rejected before they reach the shops. A domino effect of our habits as consumers.

Most of us can admit we’re guilty of steering clear of the wonky zucchini, turning our nose at the slightly-brown banana, putting back the imperfect peach – all totally edible but not quite pretty enough.

“Food wastage is such a significant problem,”

“Produce that goes in the bin releases methane gas into the atmosphere, which is 25 times more potent than car fumes. There will be a lot of issues with food sustainability and water heading into the next generations, because there are so many people on this planet to feed. It will get to the point where it’s not a matter of wanting to change, it will be needing to change our habits.”

To combat this, start a discussion and try to break habits that are so deeply engrained, Hidden Harvest run workshops at the University of Wollongong. These fun and creative cooking-style classes encourage simple shifts, like using broccoli stalks and beetroot leaves in dishes, and quashing the need to top and tail beans. Small changes that effect big change!

“I did a workshop at UOW, that’s how I got involved with Hidden Harvest,” Susie says. “I remember being told, ‘Do you realise you don’t have to peel the carrot – you can save time and just eat the skin?’. That was a light-bulb moment for me, and these are the moments we want to encourage in others.”

Thanks to organisations like Hidden Harvest, awareness is growing, attitudes are progressing, ideas are being shared – and that’s the core of these committed volunteers, who are championing this necessary cause. “We’re all just really passionate about this message,” says Susie.

“Every time we have a dinner, a pop-up event, a workshop, we’d just love people to come along, learn something, spread the message with your friends and family. The big goal is for us to have a community kitchen one day that uses leftover produce. A food waste cafe, where we can share meals and ideas.”