search
clear
Contact
Large talent pool 20,000+ commuters, skilled locals and UOW graduates
Vibrant coastal city Discover more about why you will love living here
Work-life balance A city where you can achieve real work-life balance
Supportive environment Discover more about local business networks and support
One hour south of Sydney Strategic location, close to Sydney, its airport, and Canberra
UOW – a global university Where you can develop research and commercial partnerships
Costs and staff retention Up to 33% more cost effective than Sydney, Melbourne and Parramatta
Business case studies Hear from the experience of business people who live and work in Wollongong (and love it).
Key opportunities Wollongong provides opportunities across industries and key sectors
Advanced manufacturing Future focus on advanced machinery, equipment design and manufacturing
Defence Capabilities and innovative research in defence technologies and services
Professional services Professional, financial, and shared services firms call Wollongong home
Scaleups and entrepreneurs Wollongong scale-up successes and our entrepreneurial community
Tech Growing hub for forward-thinking tech companies and start-ups
Clean energy Wollongong is emerging as a clean and low-carbon energy hub
Set up a business Find practical information to hit the ground running
Our economic profile Statistics covering our economy and workforce
Our precincts Explore Wollongong's business precincts
Our business networks A list of business groups, networks and meetups
Finding real estate Discover our commercial, industrial and residential options
Economic development The plan for our city between now and 2029
Registering a business Tips and links to set up your business here
Case studies Hear from the experience of business people who live and work in Wollongong (and love it).
How we can help Find out the various ways we can help you and your business
Business case development Assistance with developing your business case for Wollongong
Creating connections We can help you meet the right people in the right places
International team Reach out to our colleagues in your country
Incentives and programs Information about the incentives and programs to support your move
Home / News & Blogs / Doing business in Wollongong / Cranes put Wollongong on the national stage

Cranes on the skyline are putting Wollongong on the national stage

Wollongong is celebrating making its debut on the national crane index.

With 18 cranes on the skyline the city comes in ahead of the Central Coast with 14, Newcastle 12, Sunshine Coast 11, Hobart 5 and Darwin 1.

Wollongong ranks only behind Gold Coast with 29 cranes for having the most in regional Australia and only one behind Adelaide.

It included Wollongong for the first time with assistance from Wollongong City Council’s Economic Development Department. 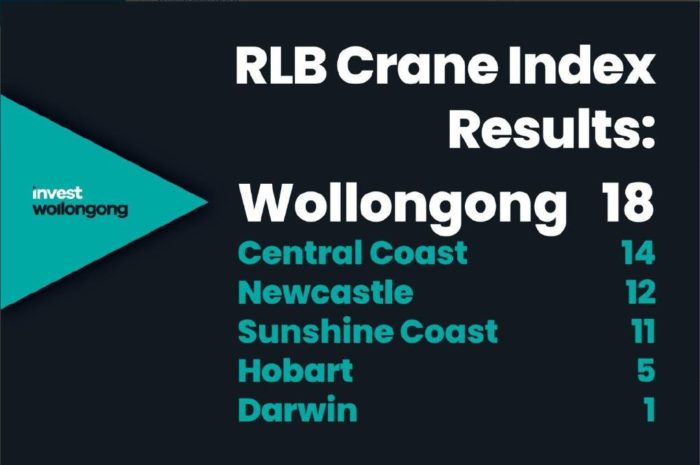 Using data provided by economic development manager Mark Grimson, the index showed Wollongong had the lowest recorded single residential mix of cranes in Australia but had the highest mixed use percentage.

Those eight cranes show the majority of residential developments in the city are at mixed-use projects which include Parq on Flinders, Crownview Wollongong, Signature in Regent St, Avante in Rawson St, Skye Wollongong, Atchison St, and the Verge in Underwood St, Corrimal.

There are five cranes on residential projects in Loftus, Beatson and Church streets, as well as The Village in Corrimal.
And there are commercial cranes at the Gateway on Keira Street and the new IMB Bank headquarters.

The release of the national crane index coincides with the launch of Invest Wollongong as new branding for the city.

Demolition has also started on Lang’s Corner and Mr Grimson said when the 19th crane is erected in coming weeks it will be for the largest A grade commercial office development to occur in the city. It is almost twice the size of the IMB development on Burelli St.

Mr Grimson said it was fantastic to see Wollongong included on the national crane index which will help put the city on the international radar.

“The more people who understand and know of the development happening in the city the more there will be an appreciation of the opportunities that exist here.“

“This is about how people perceive Wollongong. There will be a lot of people who read this report and be very surprised.

“A part of our challenge is to keep the momentum going to ensure we continue to raise Wollongong’s profile at the national level so people understand the opportunities that exist here from a business and investment perspective”.

Only Sydney, Melbourne, Brisbane, Adelaide, Canberra, Perth and the Gold Coast rank ahead of Wollongong on the national crane index.