search
clear
Contact
Large talent pool 20,000+ commuters, skilled locals and UOW graduates
Vibrant coastal city Discover more about why you will love living here
Work-life balance A city where you can achieve real work-life balance
Supportive environment Discover more about local business networks and support
One hour south of Sydney Strategic location, close to Sydney, its airport, and Canberra
UOW – a global university Where you can develop research and commercial partnerships
Costs and staff retention Up to 33% more cost effective than Sydney, Melbourne and Parramatta
Business case studies Hear from the experience of business people who live and work in Wollongong (and love it).
Key opportunities Wollongong provides opportunities across industries and key sectors
Advanced manufacturing Future focus on advanced machinery, equipment design and manufacturing
Defence Capabilities and innovative research in defence technologies and services
Professional services Professional, financial, and shared services firms call Wollongong home
Scaleups and entrepreneurs Wollongong scale-up successes and our entrepreneurial community
Tech Growing hub for forward-thinking tech companies and start-ups
Clean energy Wollongong is emerging as a clean and low-carbon energy hub
Set up a business Find practical information to hit the ground running
Our economic profile Statistics covering our economy and workforce
Our precincts Explore Wollongong's business precincts
Our business networks A list of business groups, networks and meetups
Finding real estate Discover our commercial, industrial and residential options
Economic development The plan for our city between now and 2029
Registering a business Tips and links to set up your business here
Case studies Hear from the experience of business people who live and work in Wollongong (and love it).
How we can help Find out the various ways we can help you and your business
Business case development Assistance with developing your business case for Wollongong
Creating connections We can help you meet the right people in the right places
International team Reach out to our colleagues in your country
Incentives and programs Information about the incentives and programs to support your move
Home / News & Blogs / Blogs / Depictions of classic Australian suburbia and architecture 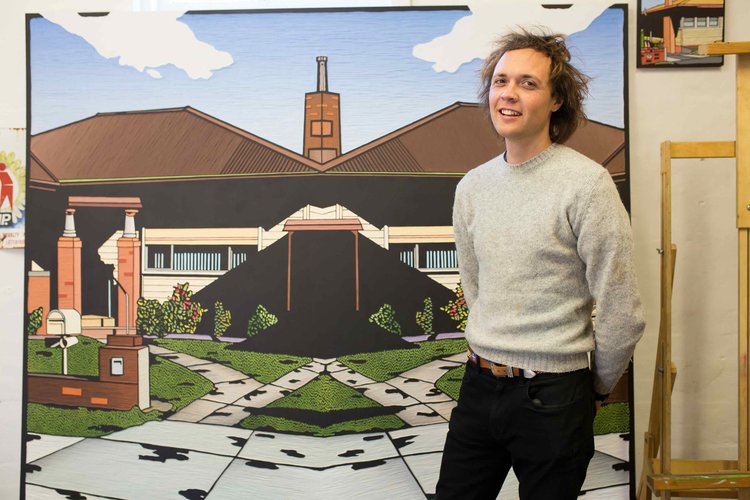 Christopher Zanko’s depictions of classic Australian suburbia and architecture – created through carving and painting – feel happy and nostalgic, as though cementing a time in local history, while also celebrating the beauty of an everyday normal.

“These days a lot of homes and buildings are being knocked down, so the area is not going to look like this for much longer,” Chris says. “It’s great to be able to capture these beautiful buildings while they’re still here.”

The response to his work has been enormously positive. He was a finalist in the 2016 Gosford Art Prize and the 2015 Lloyd Rees Memorial Youth Art Award. He has also shown in numerous group exhibitions including at Hazelhurst Regional Gallery in Gymea, Project Contemporary Art Space, Wollongong, the Casula Powerhouse Art Centre and Edwina Corlette Gallery in Brisbane – who he is also represented by.

Umbra, his first solo show at The Egg & Dart Gallery in Thirroul, sold out in just hours, and his following exhibitions all followed suit!

“I find it quite overwhelming,” Chris says of the success. “But it’s never been the driving factor that defines what and why I create the things I do. I strive to be mindful of this as an artist.

I work really hard on my work – it’s a very slow and patient process. If someone can be inspired by what I have expressed to then have a conversation or create something themselves… that is where the real pay-off is.” 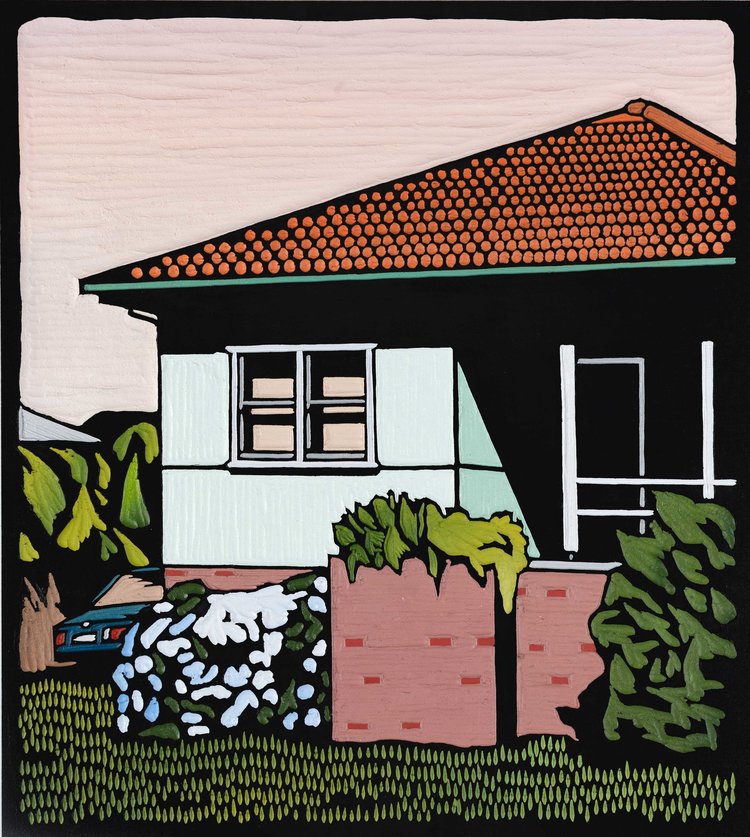 Art has always been a part of the 26-year-old from Austinmer’s world. His mum is an artist and both his parents are strong supporters of the arts. “They always encouraged me to draw, sculpt, paint and make noise,” says Chris, who is also a member of seven-piece rock band The Pinheads, who regularly tour Australia and released their debut album via local music label, Farmer & the Owl.

Through high school, Chris admits to battling to remain interested in art as creative-based subjects were so strictly tied to curriculum and grade-based outcomes. When he enrolled in fine arts at TAFE, he found a real passion for printmaking. Following that, he completed a Bachelor of Creative Arts majoring in Visual Art at the University of Wollongong. And since then his artistic career has gone from strength to strength.

His acrylic on wood relief carving starts with an initial drafted drawing on the fibre-board surface. Then there is the introduction of tools that carve into this surface, responding to the texture of the homes he chooses to capture, before the work is painted black and then colour is added.

The buildings are sculptures set against the Illawarra landscape, vulnerable to changing circumstance. Keen to preserve this layered history, Chris documents cottages, beach shacks and bungalows that feature throughout the Illawarra, ensuring their permanence, whether the structure remains or not.

“I love documenting older houses in regional areas – the effect a bypass or gentrification of an area can have is pretty evident in the housing,” explains Chris.

Carving and painting was something that came as almost an extension of Chris’s first brush strokes as a street artist. “Growing up, I was heavily into graffiti and while studying art, I focussed on figurative oil painting,” says Chris. “I can see a strong link between things I learnt through graffiti and what I am creating now.”

Most recently, Chris finished a large piece that took more than 100 hours to complete for an exhibition in September at Wollongong Art Gallery, as part of their 40th anniversary celebration. While the scale of this work is far bigger than anything he has made before, Chris says he “found it both challenging and exciting.”

With a strong artistic family being built at The Egg & Dart, where Chris is one of a stable of talented artists, and what seems a regional renaissance period for local makers, musicians and creatives, Chris is finding inspiration in his peers and this wonderful celebration of community.

“There is so many great creatives in this area and I believe it drives us to be a part of, and support, a bigger conversation – sharing and expressing through a creative practice how we see, interpret and experience the world,” he says..